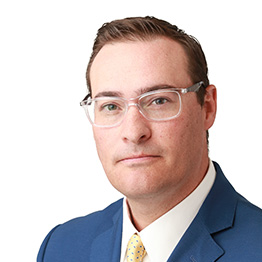 Mr. O’Grodnick is admitted to practice in New Jersey State and Federal Courts and was admitted to the United States Supreme Court in 2014. Michael also represents several municipalities and was recently appointed as a Municipal Prosecutor in Raritan Township and Hampton Borough and Litigation Counsel for the Township of Bridgewater, and has served as Special Litigation Counsel to Somerset County. Michael has previously served as Municipal Prosecutor is South Plainfield, Tax Attorney for the Borough of Middlesex, and was recently appointed as Tax Attorney for Manville Borough and Bridgewater Township. Michael also serves as Board Attorney for South Plainfield Planning Board and South Plainfield Board of Adjustment. He currently serves as a Trustee of the Somerset County Bar Foundation.

Mr. O’Grodnick is responsible for all levels of case management through trials and appeals.